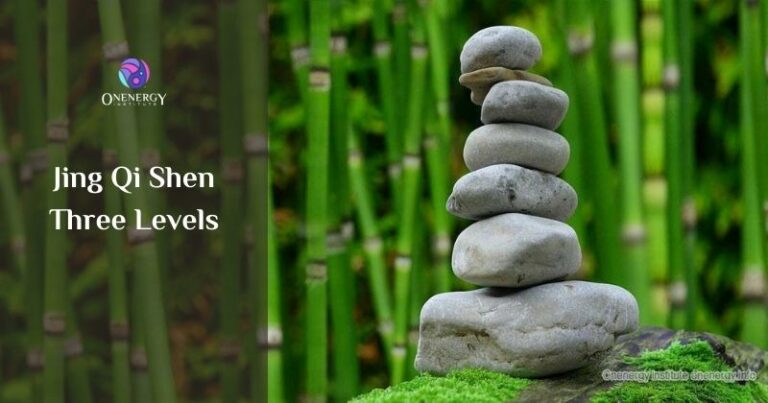 Jing Qi Shen 精气神, the name of the three qi levels, is what most qigong practitioners are familiar with. However, not everyone knows how to differentiate between Jing Qi and Shen, or how to practice differently.

Same for me in the past. Over the past few decades, I have learned multiple practicing methods from qigong master purposing for those three levels.

I thought I mastered all of those practices very well. Until one day, I read the book The Heart Philosophy.

From that moment, I suddenly realized the connections between these three qi levels.

Grandmaster Dr. Pang‘s early book “Hunyuan Entirety Theory” reveals that Qi is the most fundamental element in this universe.

Qi manifests everything that we can detect with our five sensory organs. It also manifests all things we cannot sense, recognize or understand.

Qi is fundamental but very complicated in the way it manifests. As far as our logical mind can understand, Hun Yuan Ling Tong Qi (Onenergy) is the original and primitive form of qi. It is so pure that it has no personality or character. You can think of it like a newborn baby.

At any moment, Onenergy merges, transforms, and gathers into qi groups. When that happens, it starts to show different characters and functions. Thus different things are manifested.

You wouldn’t call a pile of wood a chair unless it takes a chair form and has a chair’s function. We call ourselves humans because we have human form and functions.

Whether we can detect, understand or experience it, Qi is always mobilizing, transforming, and merging. And that creates this wonderful world.

Part of me is also a part of you. Through practicing Qigong, we will become more sensible about the qi existence. Then we can experience, not imagine, that we and everything are connected.

Jing 精 refers to the qi existence at the physical level. Jing manifests our body and its functions. Therefore, Jing has the highest qi density among the three: Jing Qi and Shen.

In Taoism, Jing refers to the innate qi that we inherited from our parents. Jing is stored in our kidneys. Think about this; if our kidney fails, our body health will collapse dramatically.

Every day Jing supports all body functions so that we can breathe, move, digest, defend, recover and think. When we lack Jing, we will find all kinds of health issues.

For example, have you seen some people who can eat tons of food but are still healthy and skinny? But why are you overweight? It’s not because you are taking too many calories in your diet.

You can’t fully digest and absorb all the nutrients and qi in food. Why? Because you lack Jing to support your digestion system to function efficiently.

Ordinary people overconsume their Jing through multiple unhealthy habits. Watching TV, listening to music, playing games non-stop for hours. Drinking alcohol and cold drinks daily, taking drugs or medications regularly, and having excessive sex. By the way, sex is not prohibited in qigong.

Ordinary people supplement their Jing when sleeping or eating. Unfortunately, their unhealthy habits also develop sleep and digestion issues. So their entire life over consumes and hardly replenishes Jing.

Qi 氣 refers to the energy level of qi existence. Qi flows throughout our entire body, between organs, cells, and tissues, transporting and providing energy.

In Taoism, Qi manifests blood. From the modern medical science perspective, blood transports oxygen and nutrients. When Qi does not flow smoothly, we can experience various serious diseases. Cardiovascular issues, leukemia, AIDS, and so on.

Qi exists not only inside our body but permeates around our body. Our Qi interacts with other people and other things. For example, when our Qi interacts and senses the other person or animal’s Qi, we find them attractive or threatening.

Another example is how Qi can bond humans, as well as humans with their pets. Their Qi merges and interacts when they and their companion have physical and emotional contact. When it happens regularly, they sort of become one.

When their companion leaves or dies, they can sense that part of them is lost. Because some of their Qi do go with their companion. If they are not conscious, they could be trapped in that loss and suffer physically and mentally for years.

Some people are born with Qi sensibility. Most people can develop that ability through practicing qigong. When you can sense qi, you can mobilize it to make things happen. Qigong healing is, for example, a way to proactively mobilize qi to heal.

Shen 神 refers to the spiritual level of qi existence in humans. Some understand Shen as the conscious mind, some interpret Shen as spirit. Actually, Shen could mean different things in different contexts.

Shen in Buddhist practice means consciousness. Consciousness is not the conscious mind. You shall refer to how to tell qigong mindfulness or consciousness for their differences.

Shen in Taoist practice refers to the purest and most intelligent qi that is closest to Onenergy, the universe’s primitive qi.

Both Buddhism and Taoism pursue Shen as the final stage of spiritual awakening or enlightenment. Taoism believes that when one accesses Shen, one becomes 仙 which means beyond humans. Buddhism calls the enlightened person Buddha, which means the one who is beyond the mind.

When you reach the Shen level, you will know. You won’t miss it, but you can’t tell it.

Although we give three different names to explain the qi of different levels, there’s no clear boundary between the three.

Jing is mostly a physical manifestation. Shen is mostly non-physical. And Qi is the transition between Jing and Shen. Therefore, we can say that Qi is half physical and half non-physical.

Jing Qi and Shen can transition to each other. Alchemy in Taoism refers to a practice that transitions Jing to Qi and Shen. However, such practice is almost impossible for ordinary people.

Because it requires utmost stillness and commitment. It could mean no human contact, food, water, or sleep for days. The slightest distraction and qi deviation can cost a life.

For most people, health and wellness are what they need. So you should practice how to consume Jing less, make your Qi flow smoothly, and make your Shen clear.

Everyone and everything has three levels of qi existence. Human existence relies on Jing Qi Shen at all three qi. However, most people only perceive Jing and don’t know about Qi or Shen.

If you only do fitness exercises that deal with the physical body qi, you are imbalanced in the other two qi. Therefore health problems will still come. You need to practice qigong to work on all three qi levels.

Jing Qi and Shen can transition to each other. When you have abundant Jing and Qi, they can nourish your Shen. Different qigong practices deal with different qi levels. Onenergy Qigong has different forms to focus on different qi.