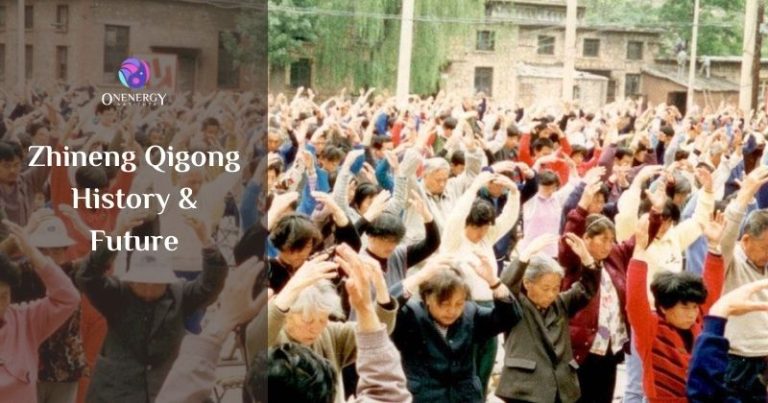 Looking for information about Zhineng Qigong? This article offers you an objective and complete view of Zhi Neng Qigong’s history, present, and future.

Dr. Pang Ming created and started to publicly teach He Xiang Zhuang (鹤翔庄) in the late ’70s and early ’80s. From 1986 to 1989, Dr. Pang published a series of qigong scientific theories, including:

In the early 90s, Dr. Pang officially named his qigong forms and theory as Zhi Neng Qi Gong (智能气功). His first form He Xiang Zhuang evolved into Lift Qi Up And Pour Qi Down (捧气灌顶), and became the Zhineng Qigong’s first-level qigong method. In 1988, he found Zhi Neng Qigong Institute in Shijiazhuang, Hebei province. It was later renamed to Huaxia Zhineng Qigong Healing and Training Center (华夏智能气功培训中心) in 1991.

(You shall not copy or translate part or full article without our permission. If you want to quote, check Rights Reserved.)

From 1992 to 1998, Huaxia Zhineng Qigong Healing and Training Center had over 600 employees and had serviced over 300,000 students and patients.

Since 1992, the average number of students and patients in the center was about 4,000 every month, with peak months of over 7,000. Over the years, the Center has treated patients with 200 different diseases and achieved an overall effectiveness rate of 90%.

At least 95% of people who came to the Center sought healing. Because most of them were diagnosed with critical and chronic illnesses i.e. cancers, tumours, etc, they were doomed in the doctor’s eyes.  However, after just a month of qigong exercises and practice, their symptoms started to disappear. Lots of them had fully recovered after 6 months or a year-long program.

Zhineng Qigong created so many healing miracles. Therefore, many people wanted to know how and why. Dr. Pang was interviewed about the Centre’s healing results and etc. in 1994. You can find the full translation of that interview here.

Zhi Neng Qigong Town was Pang Ming’s biggest dream. In 1996, the construction of Qigong Town (气功城) was broken ground in Shunyi, Beijing. Qigong Town was supposed to be the only and the biggest qigong university in the world. Unfortunately was forced to stop and abandoned in the late 90s. to comply with the Chinese government’s banning public qigong teaching and practicing rules.

In 2001, Huaxia Zhineng Qigong Healing and Training Center was closed to comply with the new qigong regulations of the Chinese government. That event symbolized that Zhi Neng Qigong’s golden years in China had ended.

After the 2001 Huaxia Zhineng Qigong center closed, all the qigong teachers and staff who worked for the center were dismissed. Most of them returned to their hometowns and did jobs that had nothing to do with qigong teaching or healing. No one was allowed to teach Qigong openly in mainland China since the Chinese government banned all public Qigong teaching and practice because of the Falun Gong incident in 1999/2000.

Pang also announced his retirement that year and announced that there would be no more Zhi Neng Qigong teaching, teachers, or organization of any kind. That means after 2001, no one would be or could be certificated as an official Zhineng Qigong teacher.

Today, some former Zhineng Qigong teachers started their own operations to teach qigong underground in China. Some of them may issue their own certificate but not in the Zhi Neng Qigong title.

Some former Zhineng Qigong teachers immigrated to Canada, the U.S. to teach qigong to westerners. Of course, they may issue the certificate of their own organizations.

Zhineng Qigong Practitioners Around The World

During Huaxia healing center time (before 2000), quite a few foreigners came to the center to seek healing. They learned and practiced qigong there but few of them got certified as Zhineng Qigong teachers. Later they brought Zhineng qigong to their countries and some of them tried to teach others.

Master Dai, the founder of Onenergy Institute, was certified as a Zhineng Qigong teacher by Hua Xia Zhineng Qigong Healing and Training Center (the Center) back in 1996. He then joined the Center’s two-year distance learning program from 1996 to 1998.

He and his family moved to Canada in 2002. He had done several jobs and started his own business over the years. He gathered a wider and deep understanding of local westerns’ life and struggles. All of these experiences inspired him to start Onenergy Institute in 2017. In 2018, Master Dai met Dr. Pang in person.

Master Dai believes that Qigong is not just about relaxation or healing. Relaxation is just the preparation for Qigong practice. And healing is just a by-product of Qigong and meditation. He founded Onenergy Institute, aiming to teach Qigong’s true essence. He pours his insights and profound teaching into the Onenergy Qigong APP. So that everyone can learn and practice Qigong from anywhere they want. If you are new to qigong, you can start with the qigong for beginners guide.

A new Zhi Neng Qigong era has begun. Join us to start the journey, whether for your health, wealth, or spiritual growth.

Master Dai was one of the former Zhi Neng qigong students. He was certified as a Zhineng Qigong teacher in 1996. (Photos of Dai in the Center in 1996)